People think RV living is for retired people, but it’s not at all. Millions of people are doing it now, and a good majority of them are young. Join some RV groups on Facebook and you’ll see the diversity in age and backgrounds. For millions of people, living the American dream means living fulltime in an RV. You’ve probably seen the tv show Going RV. The one where people look at three RVs that they believe will suit their RV lifestyle. At the end of the show, they pick one and head out on the open road.
While we (thankfully) didn’t go on the show, we did spend over a year looking at RVs at local dealers, doing research…a lot of research…on what we wanted, and stopping in campgrounds to talk to the people who are already doing it. That’s when we came up with what we knew would fit both our current and future untethered life on the road.
Knowing what we know now from all the research and having put in several months, campgrounds, and miles on the road, watching shows like Going RV is almost laughable. Here’s why:
1. The Shower. Everyone looking at RVs who says, “Oh, this is nice! I can fit in here,” about the shower, put that notion aside. First of all, my fiancé is 6’7” and he fits just fine in our 5th wheel’s shower. So yes, if you’re shorter than that, you’ll be fine. But, here’s what the sale person isn’t telling you…you spend MAYBE three minutes of your day in that shower before the hot water tank runs out and you’re rinsing your shampoo or conditioner out with cold water. Don’t let your decision be based on a shower that you spend three minutes of a twenty-four hour day.
2. The Closets. RV’s are not houses on wheels. They are apartments, at best, on wheels. Yes, they are home when you move in, and they are wonderful, but our 39’ 5th wheel, which is on the larger side, is only about 500 square feet. You’re simply not going to have the walk-in closet space you might be used to. Research says we only wear 10% of our wardrobe. That little statistic might come in handy when you pack your RV. It did for me.
3. The Oven. RV ovens are small. There will be no 14-pound Thanksgiving turkeys in there. But, you can bake a batch of brownies and a meatloaf. We mostly use the stovetop and the outdoor grill. Our microwave is a convection one, but we don’t use it much except to reheat coffee.
4. The Toilet/Black Tank. I’ve never, ever seen the sales rep on the show mention the black tank, let alone where the hoses hook up or how to empty the tank. They’re happy to show the outside kitchen or television, but goodness, no, don’t bring up the black tank or people will run away and wonder why they ever thought about RV living. If you’re wondering what I’m talking about, rent the Robin Williams movie, RV.
5. The Television. Aren’t those nice, big tvs great? Just like home! Except at home you probably have full cable service and wifi that you run Netflix on without buffering. Out on the road, you’re lucky to find a campground with cable. Most offer digital antennae reception. Sure, you can run Netflix on your hotspot, if you have good wifi service at the campground and at 10 o’clock in the morning because at night, EVERYONE is on the wifi and it slows down to a turtle’s pace. In other words, remember that outdoor tv the salesman boasted about? Well, we use the radio under it more than we do the tv itself. Though, I will say we have been able to receive about 10 to 15 local channels via the digital antennae at most campgrounds. Just remember to put the antennae down when you leave.
6. Internet. As mentioned above, most people tap into the wifi at night. Since I work from home, I do most of my critical wifi required work during the early morning hours when most people aren’t on the internet yet. There have been several occasions where I used my phone or iPad as a hot spot because it was simply better reception. We now have an unlimited data plan.
7. The Refrigerator. Most RV refrigerators are basically a step up from dorm size ones with a freezer. However, they do have “residential” size fridges, which was standard in our 5thwheel. Much like the oven, and the closets, space is limited. However, we can comfortably store enough food for two for a long weekend or up to a week depending on what we buy.

We love our life untethered because our backyard can be the mountains or a lake or the ocean. We never have to mow a lawn, rake leaves, or shovel a driveway again. If we don’t like our neighbors, we can move…though, I will say, we have met the nicest people in campgrounds and have made life-long friendships.
We started a YouTube channel and V-blog on our adventures. Since we have two black labs, it’s called Black Lab RV Adventures. We do campground reviews, travel tips, how to set up at a campground, 5th wheel hitch recommendations, and much more. Stop by and take a look inside the RV life.
In the meantime, we started a Medium series, where we will continue to add to Living Life Untethered in an RV…
Labels: 5th wheel Beach Black Labs Camp Hatteras Campground camping full-time RV Living Hatteras North Carolina OBX Outer Banks RV rv life RV Living RV Park
Location: Camp Hatteras RV Resort & Campground, 24798 NC-12, Rodanthe, NC 27968, USA 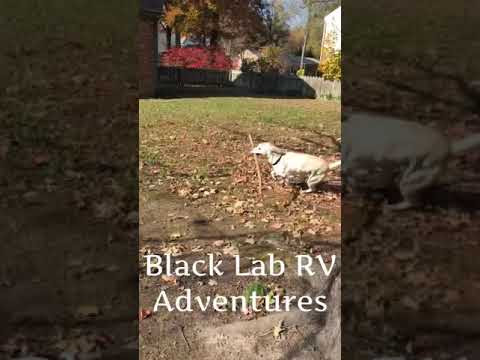 Black Lab RV Adventures Lucy and Thor Running with Sticks—Labs Will Be L...